CLEARWATER DOCUMENTARY
Based in Edmonton, Canada, Clearwater Documentary makes compelling and award-winning broadcast and feature documentaries for audiences around the world.

A four-time Gemini Award winner, and Member of the Order of Canada, Tom Radford continues a four-decade long tradition of uncompromising storytelling with visual flair.

Plutocrats (2017), The world of the 1% has arrived and the wealth gap is now greater in many countries than during the Gilded Age of the Rockefellers and the Carnegies. Can our stressed democracies deal with the fallout? Journalist Chrystia Freeland, now Canada’s Minister of Foreign Affairs, investigates.
Common Ground (2013), A chronicle of the struggle to preserve the public sector in an era of privatization and corporatization. From a collective of Canadian  farmers who take on the multi-nationals by buying a local railway, to the “recall” campaign to unseat Wisconsin Governor Scott Walker, populism is on the rise in America.
Lost Years (2012), A father and son return to China to uncover the legacy of Chinese immigration to the new world. Produced with Kenda Gee and Lost Years Productions.  Winner of multiple international awards including Best Historical Documentary at the Guangzhou festival.
​Tipping Point (2011), Feature-length documentary for the Canadian Broadcasting Corporation exploring the struggle of First Nations living with the toxic downstream effects of the Alberta Tar Sands. In the age of climate change, can a stressed planet survive the endless growth of the fossil fuel industry? 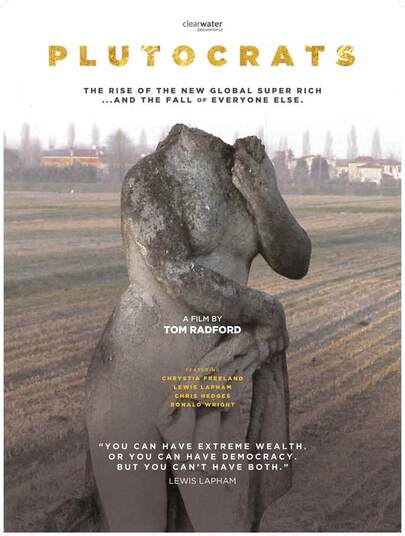 PLUTOCRATS, 2017. The world of the 1% has arrived and the wealth gap is now greater in many countries than during the Gilded Age. Can our stressed democracies deal with the fallout? Or have governments simply become instruments of the new elite?

​Canada's Sweetheart: The Rise and Fall of Lucille Starr, The First Lady of Country Music (2022), A feature length dramatized documentary on the tragic career of Canadian music legend, Lucille Starr. The first lady of country music in the 1970s, from Nashville to South Africa to Hong Kong, Starr's meteoric career was cut short by the jealousy of her manager and husband, and the sexist prejudice that prevented her escape from the nightmare of abuse.
Prairie Fire (2020), The fight of the Edmonton Journal in 1937 to preserve the freedom of the press, under attack by the Social Credit government of “Bible Bill” Aberhart, part of the rise of fascism across the world. Leading to the only Pulitzer Prize awarded outside the United States.
Oil's Deep State (2019), A film adaptation of Kevin Taft’s book Oil's Deep State, an investigation into the capture of government by the multinationals of the fossil fuel industry.  A co-production with Norway’s Mechanix Films.
The Lessons of Xiila (2019), Guujaaw,  Chief of the Raven Clan on the Pacific Islands of Haida Gwaii, teaches his teenage daughter, Xiila, the unique culture and warrior spirit of his people.
​The Skin of the Sky is Burning (2018), A four-part series exploring how First Nations have traditionally dealt with the danger of climate change. A co-production with the National Film Board of Canada. 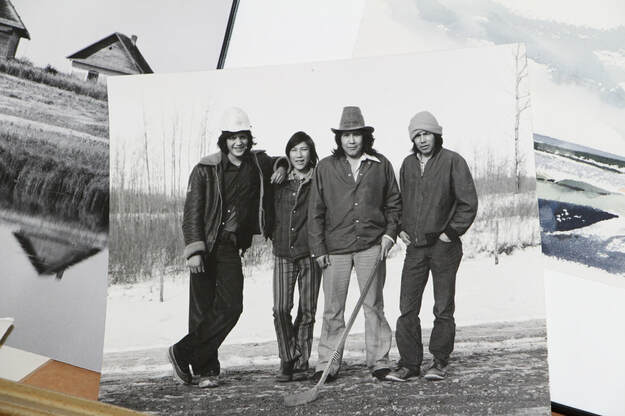 ​Highlights from Tom's Career of Over 50 Films

Land (1971), a portrait of the Great Plains through the eyes of native artists and writers. 30 min. Film Frontiers / Edmonton Educational Authority.
Death of a Delta (1972), the struggle of the citizens of Fort Chipewyan, the oldest community in Alberta, against the building of the massive Bennett Dam, upstream on the Peace River. Prize, Festival dei Populi, Florence. 30 min. Film Frontiers / Alberta Education.
Every Saturday Night (1973), a reunion of dancehall musicians who survived the dirty thirties in the Alberta town of Dorothy, population, twenty-five.  30 min. NFB/CBC "West" series.
Ernest Brown: Pioneer Photographer (1974), the opening of western Canada through the eyes of an intrepid photographer and social activist. Best Overall: Alberta; Yorkton International Documentary Festival. 60 min. Filmwest.  BBC / Australian Broadcasting Corporation
A Slow Hello (1974), the May to September marriage of a young camp cook and an old cowboy, sharing a love for the twilight years of the ranching frontier. 30 min. NFB/CBC "Pacificanada" series.
Man Who Chooses the Bush (1975), the adventures of trapper, Frank Ladouceur, fighting to preserve the traditional Métis lifestyle of the Canadian north. Best Overall: Yorkton International. 30 min. NFB.
The Forests and Vladimir Krajina (1977), the quest of a former Czech resistance fighter against the Nazis to found an ecological reserves program in British Columbia.  30 min.  NFB
Triangle Island (1979), a portrait of an ecological reserve dedicated to the preservation of the flora and fauna of the Pacific rim.  20 min.  NFB
China Mission (1980), the story of Chester Ronning, whose life as a teacher and diplomat bridged East and West, leading to Canada's recognition of the People's Republic of China. Prizes: San Francisco, Alberta, San Antonio, Ohio. 60 min. NFB.

From 1980 to 1985, as Executive Producer, Mr. Radford founded the Northwest Studio of the National Film Board of Canada in Edmonton.  During that period he produced over 20 films, including the early work of artists as diverse as Anne Wheeler and Gil Cardinal.  Foster Child, produced with Gil Cardinal won a Gemini in 1988.  Wood Mountain Poems, produced with Harvey Spak, won the Best Arts Documentary Award at the Banff Television Festival.  The Renewable Society, a 26-part television series produced for the Challenge for Change Program with Peter Boothroyd, questioned the sustainability of conventional economic and industrial development.